Recently I have been trying to learn Ember and I came across the amazing command line utility ember-cli written by Stefan Penner. ember-cli is the missing utility belt for ember based projects. Among its features is a generator that creates a strongly opinionated project structure and build chain (ember is strongly opinionated - convention over configuration). ember-cli uses an ES6 module transpiler allowing users to use next-gen ES6 module support in their current projects today. It also utilizes broccoli for build tooling as opposed to grunt which Sails seems to favor. More on that later.

I decided to take a stab at creating some Sails generators around these great projects.

In order to get started, you will need to make sure you have the latest sails, ember-cli and sails-generate-new-ember:

To use the newly installed generator, you will need to modify (or create) your .sailsrc located in your home folder. Sails allows you to override its built-in generators for creating a new application structure. So in theory you could:

The issue with that, especially if you save your .sailsrc in your home folder, is that everytime you call sails new it will use the ember-based generators. I have a feeling that you probably won't want that, so instead, you should create a .sailsrc that uses an alternate module name:

Finally, we can create our new project by calling sails generate.

If you are familiar with the default sails new <app-name> generator and it's resulting project structure, you will find some large differences here. The first thing to note is that there is no assets folder. Instead, there is an ember folder which is where all of the ember-cli based project structure resides. Since ember-cli uses broccoli for tooling, I've decided to remove the Gruntfile.js and tasks folder for the time being as all of the frontend build is being done by ember serve.

I've taken the sails-ember-blueprints project code and inserted it into the sails-generate-backend-ember step of the generator. The blueprints reside in the api/blueprints folder, they modify Sails' response output to achieve compatibility with Ember-Data's RESTAdapter. Many thanks to GitHub user mphasize for this project as I am sure it saved me a ton of time and effort.

For now, during development, you will need to start up two seperate servers: your Sails API server which will serve your JSON API (port 1337), and ember-cli's server which will serve up the proper client application code (port 4200). As you will see when you point your browser to http://localhost:4200/, there is nothing really to show as we haven't created any of our frontend (or backend) project. I recommend opening two console tabs and executing one of these commands in each. 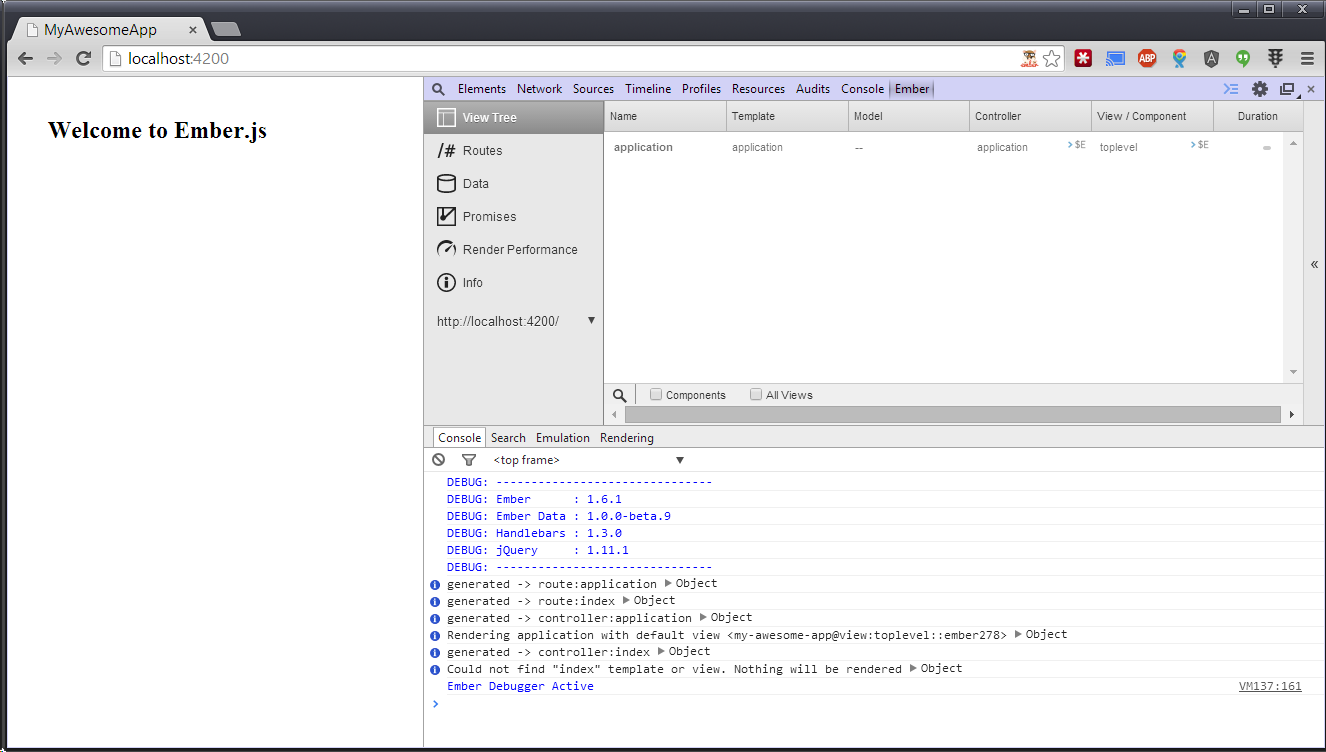 When I was developing this generator I was thinking it would be a great opportunity to try to use broccoli for building out the frontend and serving it with sails lift. Unfortunately, after looking into some of the code in ember-cli, it's not as easy as I had hoped. Both sails lift and ember serve try to serve using their own instances of express. ember serve uses broccoli under the hood to do a lot when watching templates and files in the ember project. I have mostly unsuccesfully tried to bootstrap both of these processes in the project's main app.js file, which you can run with node app.js, but you will see both commands try to use the output stream asynchronously and it results in a confusing jumble of console output. This would especially be confusing when trying to debug.

Obviously this site doesn't do anything with our Sails backend, but it gives you a starting point to create your web application using Sails and Ember. Having to run two commands to serve the Sails backend and Ember frontend is not optimal. I created these generators as an exercise to learn ember-cli, ES6 Modules and dig a little deeper into Sails generators. As Ember projects seem to gravitate towards using Rails, I thought this would be a clear next-step to get the application stack one hundred percent JS.

These generators are not intended for production use (yet), but any feedback and/or critique is welcome.