Using SQLite and Sequelize with ActionHero

This past weekend I was checking out ActionHero, a pretty nice API framework written in Node.js which claims to be: "Reusable, Scalable, and Quick!" I was setting up a quick example and I didn't want to have to connect to a MySQL or Postgres DB. ActionHero comes with fakeredis, an in-memory pseudo-redis store, which is great for experimenting but I wanted to use a local disk store. A few google searches didn't turn up too much on how to use SQLite with ActionHero, so here we go.

This will scaffold a new ActionHero project. At this point you can run npm start and you can visit http://localhost:8080 to see some basic info about your ActionHero API.

Next, we will need to add some dependencies to our project. We are going to install sqlite3 for SQLite support and Sequelize which is an ORM designed to abstract away your DB boilerplate code. Sequelize works with SQLite, MySQL and Postgres as of this writing. For quick prototyping it might be worth starting with a small/local store like SQLite and then moving to MySQL or Postgres when you have to start thinking about scaling / performance issues. Also there are some features that MySQL and Postgres include that SQLite won't (and can't) ever support.

Although we're just going to be using a simple SQLite flat-file database, let's make a configuration for any parameters we'll need to send along.

All we are doing here is attaching a new function to ActionHero's default configuration. The function gets injected with the root ActionHero object api, but we don't really need to worry about that here. We simply return an object with two keys: storage & dialect. storage will tell Sequelize where the file store is located. dialect informs Sequelize what type of store we are using, in this case it's a SQLite file store. If you were going to use MySQL or Postgres, you could include other configuration properties here such as username,password,port,hostname, etc.

ActionHero has the concept of Initializers which bootstrap configurations before the API initially starts. We need to expose an API to setup our data store. ActionHero provides a handy command line interface to scaffold certain elements of the project.

This creates a new file at initializers/sqlite.js with some stubbed methods:

Our module here exports a function which is injected with the root ActionHero object api and a callback function, next. If you've never used frameworks like express.js, the next callback is used to progress through the next "task" on the stack to run. If you are doing anything asynchronus, make sure not to execute next until your promise is resolved or rejected.

ActionHero has several pre-defined hooks: _start and _stop run exactly when you think they would. We'll be focusing on the _start method to setup our data store and models. We'll be creating a new instance of Sequelize, so we'll import the module.

Right, the cool thing about Sequelize is that it abstracts creating your tables away from you, making it easy to define your models in one place and not necessarily have to worry about your table naming etc. Let's create our Meat model file:

Later when we actually import our "Meat" module, it gets injected by Sequelize with our Sequelize object and a shortcut to an enum DataTypes. You can read about Sequelize data types on their official documentation. We're using the define method here which takes a string description of your model in the singular and then an attributes hash which will map to columns in the data store.

...and we're back (to Initializers)

Back to our sqlite initializer (initializers/sqlite.js), we need to create a new instance of Sequelize, and also create a models collection (api.models), and use the import method of our Sequelize instance sqlized.

Later, when we need to perform CRUD operations on our Meat models, we've stored a reference in api.models.

You may have noticed that all we've done with our actual SQLite store is simply create the file. It's time to syncronize our models with the SQLite store and create any necessary schema. Sequelize makes this simple with the sync method. sync returns a Promise, so we'll provide two functions (succes, error) to then.

Let's start this thing up and see what happens.

In a flurry of activity, you should see a bunch of logs flow down your screen. Some items to make a note of:

At this point you should be able to open up store/app.sqlite and see our Meat schema which has been automagically created by Sequelize. Hit CTRL-C to quite our server process.

We have succesfully created a SQLite store for our Meat schema, but we have no way of getting data into it via the API. Let's quickly create an ActionHero action to expose an API endpoint which we can POST to create some meat!

After saving actions/meat.js, start ActionHero up again by issuing npm start. Using a utility (I used POSTman, you can use cURL etc.), send a POST to http://localhost:8080/api/meatAdd and add some meat! 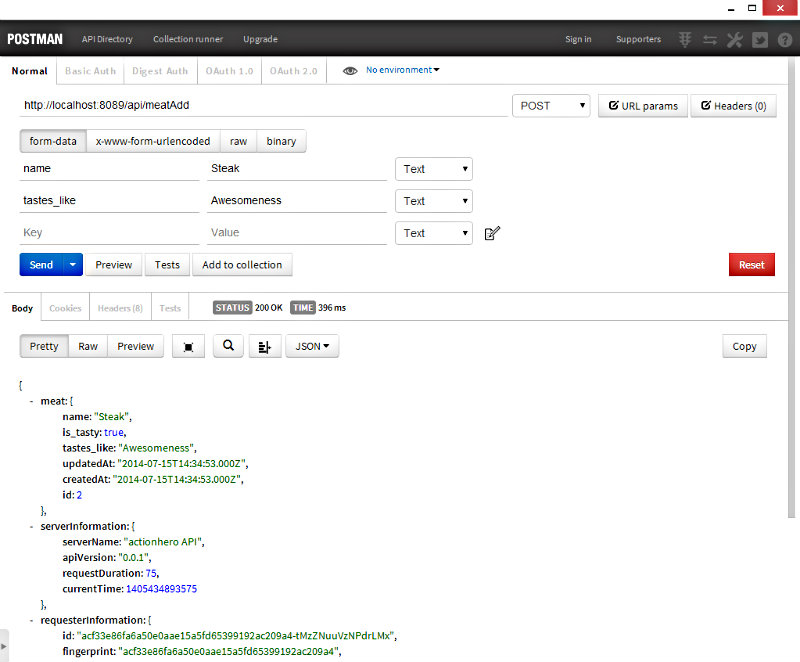 Open up your favorite SQLite GUI and verify the record was stored: 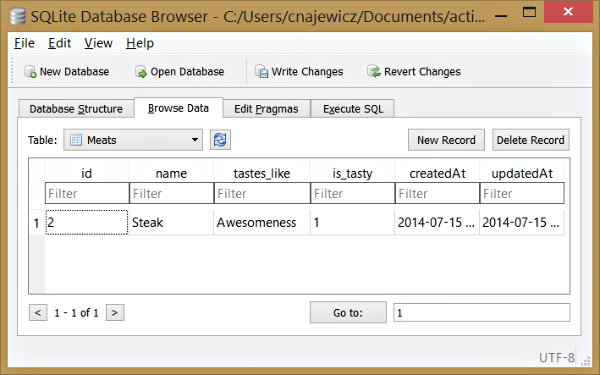 Up next, we'll create an EmberJS based UI for our meat app.

I've included the source for this project on GitHub.